However in this article we are reviewing comedian Emmanuella Bio, Wikipedia, Parents, Father, Children, Endorsement deals, 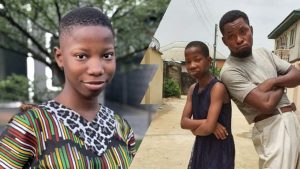 So let’s dive into Emmanuella net worth

Emmanuella Net Worth And Biography

Emmanuella Samuel Best Know as “Emmanuella” is a Nigerian comic actress, model and a TV personality who has a net worth of $150,000 dollars, making her one of the richest kids in Nigeria.

Although she is still a child, she has won a good numbers of awards for herself.

As if that is not enough, she has generated a huge fan base which keep growing everyday for herself.

Emmanuella Samuel was born 22nd of July 2010, She had her origin traced to Imo State, Nigeria.

Emmanuella is creative, clever and intelligent, It is alleged that she was discovered by her Cousin brother Mark Angel, through Mark Angel comedy skit. She was on a family holiday when she met with Mark Angel.

Mark Angel who then needed some kids for his comedy shoot, and called a few children he knew for the audition but they couldn’t memorize their lines,

He then turned to Emmanuella and she excelled despite the eighteen-hour-long video shoot, a stunt he pulled to test the endurance of the kids. After her selection, Mark Angel had to convince her parents to let her become a part of the Mark Angel Comedy team and got their approval.

Emmanuella rose to fame after she was starred in a popular Episode of Mark Angel Comedy “this is not my real face ooh” after then, she become a talk of the town, making everybody including kids want to watch more of her comedy, no wonder her YouTube channel quickly grow above 5 million subscribers in short period of time. she grew up having a big fan base, who s ever ready to watch every of her skits, this has so far earn her prestigious awards and credits.

A lot of people wonder and want to know who Emmanuella’s real parents are, but her real parents seems to be comfortable with their anonymous status,

according to reports online Emmanuella’s parents names are James Samuel and Cynthia Samuel.

On October 13th 2020, Emmanuella Samuel make news headline in Nigeria and on various social media platforms, after she reportedly build a bungalow for her Mom.

She brought a photo of the house to her Instagram page, congratulating her Mom for her new home.

Emmanuella has won several awards both locally and internationally that most adult comedians in the industry are yet to achieve.

Her endorsement with “Dabur herbal tooth paste and Fresh Yo drinks” are currently earning her millions of Naira from adverts and brand promotions.

Emanuella is from Imo State, South eastern part of Nigeria. She was born in Port Harcourt in Rivers State.

There have been controversies on her relationship with Angel, as it has been said in different circles that she is his niece and some say they are cousins.

Emmanuella is currently one of the richest and the most talented kids in Nigeria, she has earned herself a good fortune, she has an estimated net worth of $120,000 dollars.